The Historical Research Center presents Bakersfield SoundS: Exploring the Musical Diversity of Kern County, an examination of the varied musical genres, artists, and venues of Bakersfield and Kern County.

The country music scene in Kern County, represented by that iconic “Bakersfield Sound,” often overshadows the range of music produced and performed in Bakersfield and the surrounding area. Jazz, blues, nu-metal, mariachi, hip-hop, opera, rock – all musical genres that historically or currently play on stages in Bakersfield’s bars, amphitheaters, and at local events – often slip

through the cracks of national and regional understandings of rural California’s musical landscape. Bakersfield SoundS, with an emphasis on the plurality in the word “sounds,” showcases musical talent, education, and success in Kern County.

The Bakersfield SoundS exhibit features local musicians, bands, venues, events, and educational programs that have and continue to contribute to the musical landscape of the Central Valley. The exhibit includes information about music groups Korn, Adema, Burning Image, Al Garcia and the Rhythm Kings and highlights Black artists including Gregory Porter and Billy Haynes and events including the Bakersfield Jazz Festival and Runner Nights Spring Concert Series at CSUB.

Visitors can learn about the music that emerged from the farm workers’ movement in Delano, the anti-establishment goth punk and nu metal sounds that surfaced as a reaction to conservatism in rural California, and the staples of jazz, blues, and rock music that encouraged people take to the dance floor in clubs up and down the Central Valley over the decades.  Visitors can also expect to hear music from Bakersfield-area high schools, local legends who have performed for former presidents and the Queen of England, as well as a feature on world-renowned opera singer Lawrence Tibbett.

Through this exhibit, the HRC aims to expose the music scenes that are more representative of the Bakersfield community, highlight the artists that were influenced by the local music scene, and the way they impacted the music industry.

Bakersfield SoundS: Exploring the Musical Diversity of Kern County will be on display for the 2022-2023 school year in the Historical Research Center Gallery. 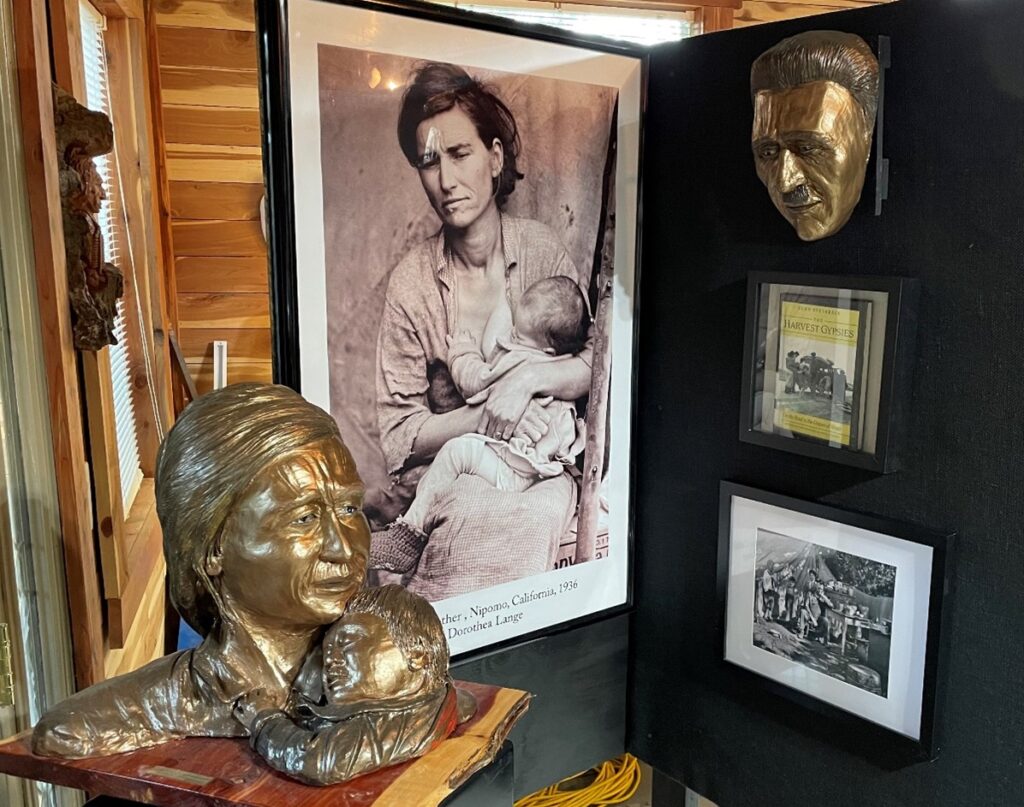 Panel 1. Begins with Dorothea Lange’s image of her “Migrant Mother and Child,” with Lew’s 3-D work of the same name. To the right (top) is Tom Collins, an important connection between Dorothea and John.

This exhibit links John Steinbeck’s The Grapes of Wrath (Grapes) and its relationship to and influence on Woody Guthrie, which subsequently inspired a cultural revolution in American folk music during the 20th Century. The artistic connection in the exhibit includes life-sized sculpture portraits, original photographic images, themed paintings, and photographs and personal collection items. The narrative provides the necessary information to support the theory that while Steinbeck intended to and succeeded in creating a literary masterpiece with Grapes, the novel spurred an unintentional cultural chain of influence.